We don´t need no Learning to learn

“We don´t need no education” Pink Floyd, The Wall… 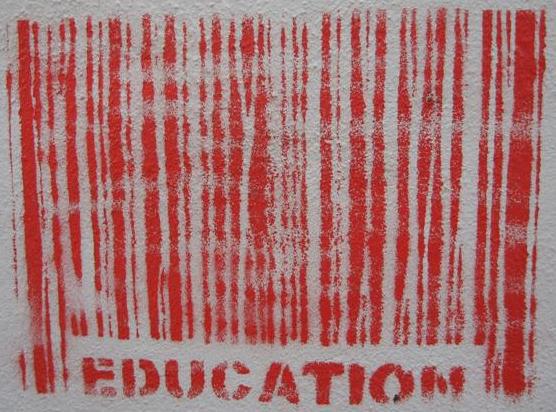 Abstract: Our nowadays educational systems are just a barcode to register each person in their future social and especially working/producing sphere.
<<Early in life humans learn to walk and talk. Later on, nevertheless, they have to learn to sit down and shut up>> Marcel Pagnol

During the first 3-5 years of your life, they let you learn on your own. Of all the immensity of abilities a baby and child has to learn in order to conform its neocortex (which makes us humans throughout its 'left side' which enslave us in the world of egos, ideas and (ir)rationality) the habilities most apreciated by the others is that you learn to walk and talk . This milestones being so fundamental and important for everybody, once you got them, they sent you to school where they force you to sit down and shut up.

The fraud of 'learning to learn'

- After seeing this video maybe you are wondering: "Where this terrible idea about we do not know how to learn by ourselves comes from? Isn´t it just a natural human talent? One we needed historically to survive in this world?. What is different now?

- Of course it was(is) a natural human talent, 'the others' just made us to forget it and try hard to make it not to remember about again through what we call education.

'Learning to learn' nowadays is officially a very important key competence for everybody, recognised as such by the European Commission as essential.

- Yes but, what for essential? For our societies to be competitives citizens instead of integrally full developed and self-learned citizens?. Let´s take a look at the Comission´s learning to learn definition:

learning to learn is related to learning, the ability to pursue and organise one's own learning, either individually or in groups, in accordance with one's own needs, and awareness of methods and opportunities (Source here)

- Pretty cool, it seems there is nothing suspicious or to be worry about that definition, right? - If this were true maybe yes and a big supranational structure like European Union is often good with nice theories which end up in terrible stream practices on regards of the economical interests (as the key competences were established to fulfill an strategy to become Europe a competitive economy and not a citizens aware one) So the governments should just make available the needed resources for their citizens to learn what they want and are interested about. - How could they do that? Changing the educational systems? Not only but of course, and they are doing it, especially the European Higher Education Area (Universities) system through the so called Bologna process. But, this is for the citizens development needs? of for the 'market' needs? which are the resources allocated from the governments in Europe? (See Bologna process Criticism)

Public schools were always a tool for the states to create a labour force competitive enough to increase the wealth of nations, artificially separated but merging slowly in a tragical cultural competition towards an universal human culture. Social skills and non fomal education were only a matter of churches and the army.

When the inner human nature was screaming for liberation of this anti-human education for a robots society (industrial revolution) the newer generations became a problem which neither schools, churches or army could handle property. Then appeared new social movements and organisations (e.g YMCA of which I talk about in the article regarding "Integral education?") trying to be a relief of that screaming to coming back our own nature but still in a controlled, economi and 'social wise' context.

Educators treated their 'pupils', especially young people, as if they were simple machines. No considerations about developping the individual own capabilities, especially if they are not productive for the system. This way interrupted a needed facilitation to make a real and not biased impact on society, through leaving a 'learning' life with oneself and the others and not against oneself and the others.

Even if we long ago know where is the problem, we are still afraid of the necessary changes and the 'old ones' fighting hard to keep the power of the artifical 'safe zone' they have created at the expenses of ourselves, of our real human nature.

+ What is learning to learn today? a good new idea to use people as if they were out-of-date robots who need to get to an advanced level in order to being able to reprogramme themselves without an expensive external ingenier/educator needed to do it. Of course, the (re)programming only will be expected to be done under the conditions of the first sociocultural programming, as far as no robot (slave) is aware about itself.

+ What do you prefer? To be a robot? (I know a lot of you prefer to be one , to live under your programation schemes instead of daring to life under your huge human capabilities and complex but enriching challenges connected with all of this) or to get back your natural potential to learn which made our specie (a very phisically weak one condemned to disappear) to survive thanks to our capability to make abstractions of our natural and spontaneous learning power.

The education through memorisation is still in use even though the already old revolution to change the model into a one more 'understanding' oriented. But, was it a real revolution for the benefit of our learning or just our indutrial society became too complex and competitive so to bear in mind plain knowledge was not enough?? Is it not happening now the same? When it is advertised as something new an revolutionary (it is not at all) the idea we now must not only learn things by heart and understand them (the way our societies wants us to understan them not the way a critical thinker should understand them in order to make changes when needed or offer alternatives) but to find out how to learn them!!!

Is it not sounding more like, if you do not learn which is useful for the 'factory' by your own and adapt yourself to our never ending competitive nonsense production system you can consider yourself and outsider which can not leave among us.

+ So now is your choice ( a not easy one) --> Entering in the new brave world where it is not needed so much people to keep the machines working or just trying to remember how you learnt when you were a child, get ride of the adulthood and take the other direction that you took when you were obliged to chosse as teenager.


Do you learn something or it is just your 'dangerous memes' trying to infect others?

Youth workers and educators should be the ones facilitating and showing all the possible paths outside and inside for the newcomers and not trying to impose the path they took (most of the times, just their dangerous memes leading them to the chosen path and making them to forget completely how the other paths look liked).

The now so famous concept of 'Learning to learn' is just a ingenous word tramp to make people forget that the real learning capacity is inside themselves. We naturally know how to teach ourselves and how teach others without obliged them to believe in our processes of learning. A lot of people is freaking out because they need somebody who teach them how to learn 'Learning to learn' - Was it possible to name this competence in a different way? - Yes, I am sure you could offer some proposals. - Why finally this name was adopted? - I think to become people fascinated by the word game in order again to make us to forget our natural learning capacity. Feeding the resistances to be aware and learn by ourselves (with ourselves) instead of by their 'memes' orders.

All of us are infected, you and me are not exceptions...